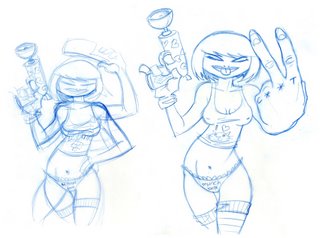 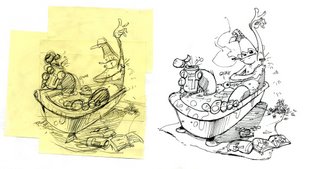 It's Friday! Woo! This bunch above are some sketches from last night, i got home from work and plonked down in front of the tv with my sketchpad....ended up doing these doodles infront of a show called Sugar Rush, great show....looks as though it might have slightly influenced one of my pictures....oh, and the show isn't about monkeys taking baths :) - The classy monkey in question is Mockchop, one of my trio of Astro Funk characters...he's gone thru a slight re design aswell, but mainly just in face/mouth area....and that's a can of tennents he's crackin' open by the way, quality scottish lager :)

All looks good. I'ld like to see more of those daft looking squirrels - they're cool!
Now I'll see if this comment thing works!