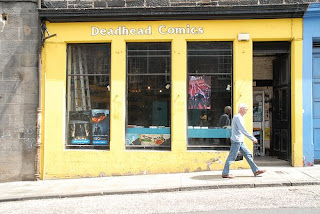 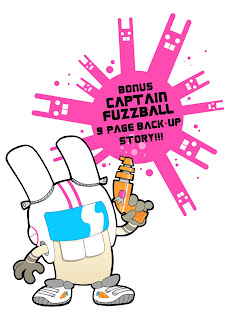 yO! Just a quick drop in with a couple bits of news....

Astrofunk is now on Sale in the fine city of Edinburgh, so any scots who want to check it out on the shelves then get down to DeadHead Comics. You can find it on CandleMaker row, just down from GreyFriars Bobby and the museum, and it's got loadsa great titles so check it out.

Second bit o' news - Astrofunk is now on Facebook. Yup, there's now a fan page for my little comic, where u can check out loadsa pics and cool stuff. So get over there now for astrogoodness!

Other than that, thought I'd better include some artwork with the post, so here's the first full colour picture of Captain Fuzzball, which was for a stand at the London Expo.

Issue 2 is going really well at the moment, so there's gonna be some preview pages up very shortly, look forwards to hearing what folks think. Until then, have a good one!
Posted by R A B at 9:09 am