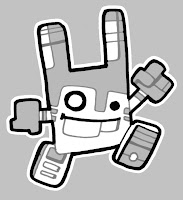 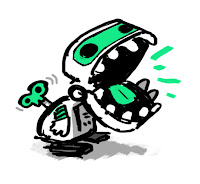 Bonsoir! I'm tryin to make the effort to get back to posting stuff regularly here, inbetween finishing astrofunk 1 and changing nappies/singing to elliot....so here's some new stuff to stick infront of yer eyes for afew seconds, give 'em a treat :) ..if u start to cry it's probably not a good sign :) ....the rabbit is a sticker that gets thrown around by the heroes in astrofunk, and the tag on the end is painted by them, and my latest attempt at graffiti, which i find pretty tough but good fun. The lil' guy in the middle is the not quite final design for some dudes who will show up shortly in the first half of astrofunk 2! He's either called 'ChompBot' or 'Chompatron'. Not decided yet :) but he'll be causing trouble no doubt....

Astorfunk 1 is....sooo very nearly finished, the 26 page main story just needs...well, something like 3 hours of work, tops. So i'm feelin good about that, getting some feedback from fellow comic book artistic style buddies this week, so hopefully by the end of the following week it will be winging it's way to publishers across the waters in the US of A. Whilst it's away I'll be finishing the colouring on the Captain Fuzzball back up story which you've glimpsed in my previous 2 posts...wish i could post more of the 9 pages which are all pencilled, but it would give away too much of the story...i wanna leave that for when the comic is in your hands! Which is hopefully early next year!!

Plus, i am scripting/sketching astrofunk 2 some more, so expect to see pencils for that up here very soon! I can't wait, it opens with brand new characters, so is great fun to draw.....watch this space!

These drawings are you doing, is running for any publisher? If you are running, I want a copy to me!!
Recalling that I live in Brazil and send a copy will not be difficult, hahaha!

the arts are very fantastcs!!

I posted on my blog a preview of the short film that my friend and I are producing. Access blog and see!