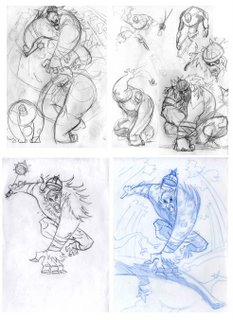 cosmo-cosmo-cosmo -COSMO CATS!
...or thunder, if u are not of the french inclination :)
Anyways... this is a bunch of sketches for a Monkian pic i was gonna work up...not sure now when it will get done, its been pushed aside for moment...maybe sometime during next few weeks...anyways, i wanna go back and see if i can get some more of the energy from original sketches into final pic, think the top left sketch has some nice flowing simple lines that are gone from blue work up...but anyways, thundercats was frickin awesome , and had a big effect on me when i was growin up, loved it. So i'm sure its not the last time one of the characters will pop up here. Would love to do a Ben-Gali pic, he was the coolest....

if yer also a fan of the cats, i would recomend checkin out the link to Cheeks blog, he has some frickin beautiful colour pics of his re-interpretation of some of the thundercats

I disagree with you about the blue sketch, I think it has lots of energy. I looks very dynamic and you really get the sense of movement. The bottom left one lacks that, but I really like the blue one.