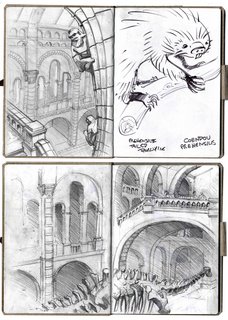 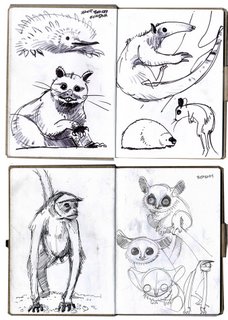 Muuunday. Oooft. But at least the weekend was good :) Was gonna head to London zoo but it was lookin a bit grey and nobody likes a soggy sketchbook....so went down to the Natural History Museum, amazing place, beautiful building , plus the animals don't run around so much :) So the zoo will hopefully happen one day soon, but will probs return to the museum aswell, loadsa cool stuff which will hopefully inspire some wierd characters.
Enjoyed doing the drawings of the building most, coz it's something i don't practice enough, plus I tried to focus on the lighting, which i need to do a lot more.
I really like the Coendou Prehensius sketch ( drawing and learning latin ;) it turned out pretty well i think, tried to keep it with quick simple brush pen lines....then the pen kinda ran out dammint so it became a sort of grey wash thingy :)
PS - man the length of the arms on that monkey - i mean, i know monkies have long arms, but man they were loo-ooong. So he may turn into lil' character sketch :)
Posted by R A B at 6:27 pm

Wow, these are great drawings! I really like the one's of the natural history museum, especially the drawing with the arch in the forground. Its got an intresting composition....are those monkey's? the dino skeleton is cool too

Nice work I like dinosaurs and you draw them good, even dead ones. I like the softer lines to give a sense of depth too. All summed up into one phrase this is good shit!!

I had to pick one to comment on and I like this, this and rabbit with socks on his ears, it was a though call but that's why they pay me the big bucks.